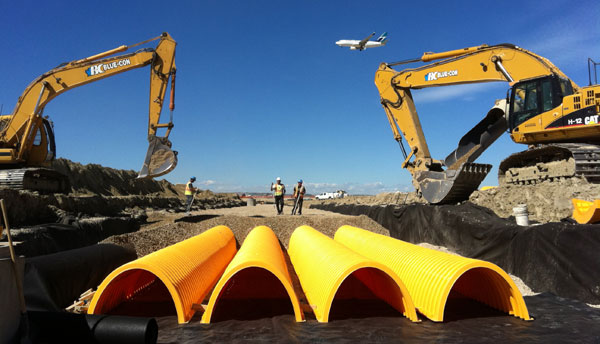 The Oxford Business Park is a new construction project being built alongside the extensive Airport Runway project in Calgary, Alberta. The business park alone spans roughly 600 acres, representing a small portion of the overall airport project footprint. The majority of this extensive area will be paved, presenting a serious problem with storm water runoff and the resulting burden on the City of Calgary’s current storm system.

The main concerns for Idea Group, the engineering consultant for the project, were the tight restrictions the City had placed on them as well as the soil conditions they were working with. When there is a heavy rainfall in a natural setting, the water covers the ground evenly and is able to percolate through the soil, allowing the land to drain. If these areas get paved over in land development, the storm water is unable to drain through the ground and must then be funneled into the City’s storm water system via a series of catch basins and large piping. Due to the large area of paved land in the Oxford Business Park, storm water presents a potential issue in which the city’s storm system may not be able to handle such a large amount of rainfall in a short period of time. The City of Calgary mandated that 75% of annual rainfall had to be retained on site and allowed to dissipate into the ground rather than into their municipal storm system.

Idea Group set out to design a solution that would meet all of their requirements. Traditional ponds were not an option due to the amount of developed land in the area. The initial idea of a misting system was not approved due to health concerns and was instead replaced by StormTech. This system consists of a series of arch chambers which meet AASHTO, ASTM and CSA design standards and can be covered with different fill materials allowing each installation to meet the unique requirements of a project in a cost-effective manner. Using the StormTech chambers, Idea Group was able to design an innovative storm water management solution that met all of their needs. 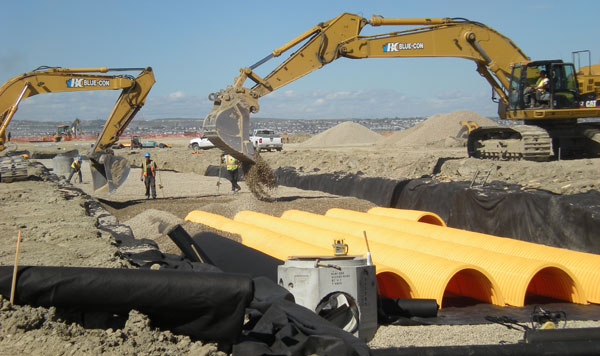 The StormTech system was built in two parts under parking lots. Idea group was able to take advantage of the modular nature of the chambers and extend the system along a large area under the parking lots, allowing them to have more area to let the water percolate through the soil. Tight soil conditions did not allow the water to drain at a fast enough rate, so the StormTech chambers were used as a retention system in order to hold the storm water long enough for it to dissipate naturally through the soil and without overloading the municipal storm system. 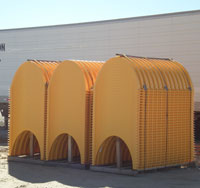 Blue-Con Excavating was chosen as the contractor for the project due to their previous experience installing a StormTech system along with their long track record for bringing exemplary quality to previous work. First, a large trench was excavated and geosynthetic fabric was rolled out to cover the bottom of the StormTech system. Next, the chambers were laid out in rows on top of the fabric. The lightweight characteristics of the StormTech chambers not only made for efficient and economical transportation to site but also allowed for each chamber to be maneuvered by hand using only two people to lift each chamber. Gravel was then poured over the chambers and wrapped in geosynthetic fabric. Roman Mucenski, the project manager for Blue-Con, said that it was a “very simple installation” and that it went smoothly, sentiments echoed by James Seller, the engineer from Idea Group who was leading the project. Peter Nelmes of ADS Hancor provided support for the StormTech system throughout the project, providing all the necessary installation manuals and guidelines, as well as consulting with Idea Group and Blue-Con the entire way through. EMCO Waterworks managed the supply and scheduling of all StormTech material on the site.

The Oxford Business Park Storm Water Management requirements initially presented several obstacles for which many other systems would not be able to handle as well. Using the Stormtech system, Idea Group and Blue-Con were able to innovatively and efficiently implement a solution for the strict storm water requirements of the City of Calgary for the project.

« Back to Past Projects